We designed the complex Nitinol actuating mechanism behind this dress that was worn on the runway at NY Fashion Week 2015 and at the Consumer Electronics Show (CES) 2016. 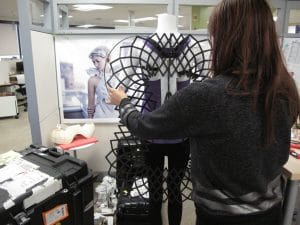 The Chromat Adrenaline Dress powered by Intel is composed of printed panels designed in an interlinked, expandable carbon fiber framework. When the garment senses adrenaline, the dress’s framework mimics the fight-or-flight mode and extends the wearer’s sensory system to form an imposing hourglass shape- signaling an augmented, empowered silhouette.

Intel’s Curie processor and a sweat sensor controlled the Nitinol actuating linkages to expand the dress.

Operation of the Adrenaline Dress Bowden cable system on a foam board.

Actuation view from the front

Here is a prototype of the Boden cable mechanism that powers the dress using 12 mil Flexinol by Dynalloy.

Here is a video showing how increasing the actuation voltage of the Nitinol increases the speed of actuation.